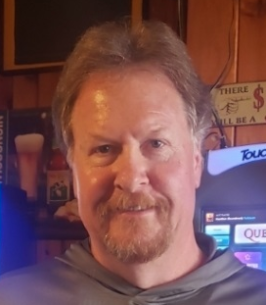 Jeff was born October 21, 1965 at St. Joseph Hospital in Milwaukee, a son of the late Wilfred “Bo” and Lois E. (Ellingboe) Riopelle. Jeff attended East High School in Menomonee Falls, graduating with the class of 1983. Following high school, he attended and graduated from Carroll College in Waukesha.

On September 21, 1991 Jeff was united in marriage to Cindy Freeman at St. Anthony Catholic Church in Menomonee Falls. The couple lived in Menomonee Falls before moving to Shawano in 2007. At the time of his death, Jeff was employed at Romo Durable Graphics in DePere, where he was the manager of the I.T. Department.

Jeff was a member of Sacred Heart Catholic Church in Shawano, and was a member of the Knights of Columbus for 32 years. He was also an honorary member of the Lions Club. He enjoyed riding his motorcycle, and traveling to new and interesting places. Jeff had a drawer full of restaurant coupons, and would take Cindy out to eat with his coupons. They both liked trying new places to eat, and meeting new people. Jeff was an avid bowler, and enjoyed watching sports on TV, especially the Packers and NASCAR. He enjoyed grilling out, and was a great baker of many sweet treats including cookies, brownies, and cheesecake, just to name a few. He was also generous in sharing everything he baked. Jeff was one of those people who was always willing to assist others.

Survivors include his loving wife, Cindy Riopelle of Shawano; his children, Jessica Riopelle and Jacob Riopelle; his grandson, Greyson Riopelle; his brothers, Robert (Lucy) Riopelle of Anchorage, Alaska and Peter (Marcia) Riopelle of New Berlin; his sister, Elizabeth (Jeffrey) Sonnemann of Menomonee Falls; his in-laws, Larry and Patricia Oinas of Shawano; and several nieces and nephews. He was preceded in death by his parents, and by his father-in-law, Jim Freeman.

A memorial service for Jeffrey Riopelle will be held at a later date.